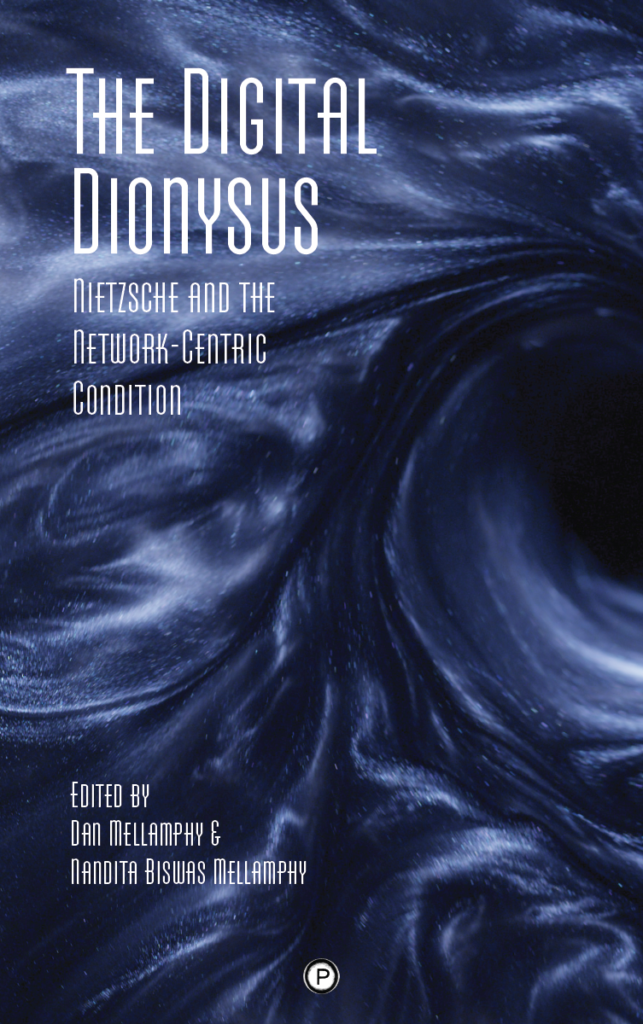 This is a highly innovative and vibrant collection of essays: it should prove essential reading for anyone who wishes to grapple with Nietzsche’s meaning for the 21st century.

This is an altogether excellent volume which demonstrates the importance of Nietzsche’s thought for decoding the vicissitudes of our digital age. Essential reading for all those interested in Nietzsche and contemporary culture alike.

Dan Mellamphy and Nandita Biswas Mellamphy have staged a brilliant collaboration among critical theorists from a range of disciplines to explore the import of  Nietzschean thought  for contemporary issues in media, technologies and digitization.  The result is The Digital Dionysus, a must-read for scholars in media, aesthetics, politics, and philosophy.

The ubiquity of digital networks would seem to constitute the triumph and culmination of Apollonian reason in the imposition of forms of cybernetic command-and-control systems. With The Digital Dionysus, however, Dan Mellamphy and Nandita Biswas Mellamphy flip this assumption on its head. Through the typically untimely introduction of Friedrich Nietzsche, the philosopher most attentive to the inherent irrationality of reason, this remarkable book brings together some of the most exciting authors of recent years from the fields of politics, philosophy, art, and media, to gaze into the depths of the screen conjuring the tumultuous world of multiple, networked becomings, techno-bodies teeming at the event-horizon of the informational abyss. Beware: this is not a Nietzsche sanitized for an age of cyber-utopias; these authors are acutely attuned to the threat as well as the promise of those digital monsters incubating in the humming of machines.

Can Nietzsche be considered a thinker of media and mediation, as the German media theorist Friedrich Kittler declared in his influential book Gramophone, Film, Typewriter?

Nietzsche was a truly transdisciplinary thinker, one who never fit into his own nineteenth-century surroundings and who recognized himself as a “herald and precursor” of the future, of our globally-reticulated digital present. Perhaps not since Kittler has there been a study — let alone an anthology — that re-assesses and re-evaluates Nietzsche’s thought in light of the technically mediated and machinic conditions of the human in the age of digital networks.

Drawing on the first four years of conference-proceedings from the annual Nietzsche Workshop @ Western (NWW, Western University), which culminated in the “New York NWW.IV”: Cyber-Nietzsche: Tunnels, Tightropes, Net-&-Meshworks (held at the Center for Transformative Media, Parsons The New School for Design), The Digital Dionysus explores Nietzschean themes in light of the problems and questions of digitization, information and technical mediation, offering its readers the opportunity to consider Nietzsche’s contemporary relevance in light of emerging theories in new media studies, political studies, critical aesthetics, the digital humanities and contemporary post-continental philosophy.

02. The Internet as a Development from Descartes’ Res Cogitans: How to Render it Dionysian, by Horst Hutter

03. Networked Nightmares: On Our Dionysian Post-Military Condition, by Manabrata Guha

04. A Philosophy of the Antichrist in the Time of The Anthropocenic Multitude: Preliminary Lexicon for the Conceptual Network, by Gary Shapiro

07. Nietzsche’s Amor Fati: Wishing and Willing in a Cybernetic Circuit, by Nicola Masciandaro

08. Outing the ‘It’ that Thinks: On the Collapse of an Intellectual Ecosystem, by R. Scott Bakker

09. All for Naught, by Eugene Thacker

10. A Horse is Being Beaten: On Nietzsche’s ‘Equinimity,’ by Dominic Pettman

11. The Rope Dancer’s Fall: ‘Going Under’ as Undergoing Nietzscheo-Simondonian Transindividuation, by Sarah Choukah

12. The Will to Obsolescence: Nietzsche, Code, and the Digital Present, by Jen Boyle

13. Farmville, Eternal Recurrence, and the Will-to-Power-Ups, by Dylan Wittkower

15. ‘Philosophizing With a Scalpel’: From Nietzsche to Nina Arsenault, by Shannon Bell

16. ‘Nietzsche in Drag’: Thinking Technology through the Theater of Judith Butler, by Arthur Kroker

Dan Mellamphy and Nandita Biswas Mellamphy (Western University) are inaugural and ongoing Fellows of the Center for Transformative Media at Parsons School of Design, The New School, Founders of the annual Nietzsche Workshop @ Western (NWW, UWO Canada), and Directors of the international Electro-Governance Group (EGG, UWO Canada), an interdisciplinary multi-departmental research center. They have published — together and independently — in the journals Deleuze Studies, Foucault Studies, Dalhousie French Studies, Culture Machine, Fibreculture, Parrhesia, Paideusis, Platform, Collapse, Symposium and Modern Drama (among others), and in anthologies such as Nietzsche as Political Philosopher; Nietzsche & Political Theory; Alchemical Traditions from Antiquity to the Avant-Garde; Leper Creativity; The Imaginary App; Critical Posthumanism and Planetary Futures; and Marshall McLuhan’s & Vilém Flusser’s Communication & Aesthetic Theories Revisited (among others). Nandita is the also the author of The Three Stigmata of Friedrich Nietzsche: Political Physiology in the Age of Nihilism (Palgrave, 2011) and Dan is also the author of Beckett Beckons: Abductive Approaches to the Post-human Present (in progress).

5 thoughts on “The Digital Dionysus: Nietzsche and the Network-Centric Condition”