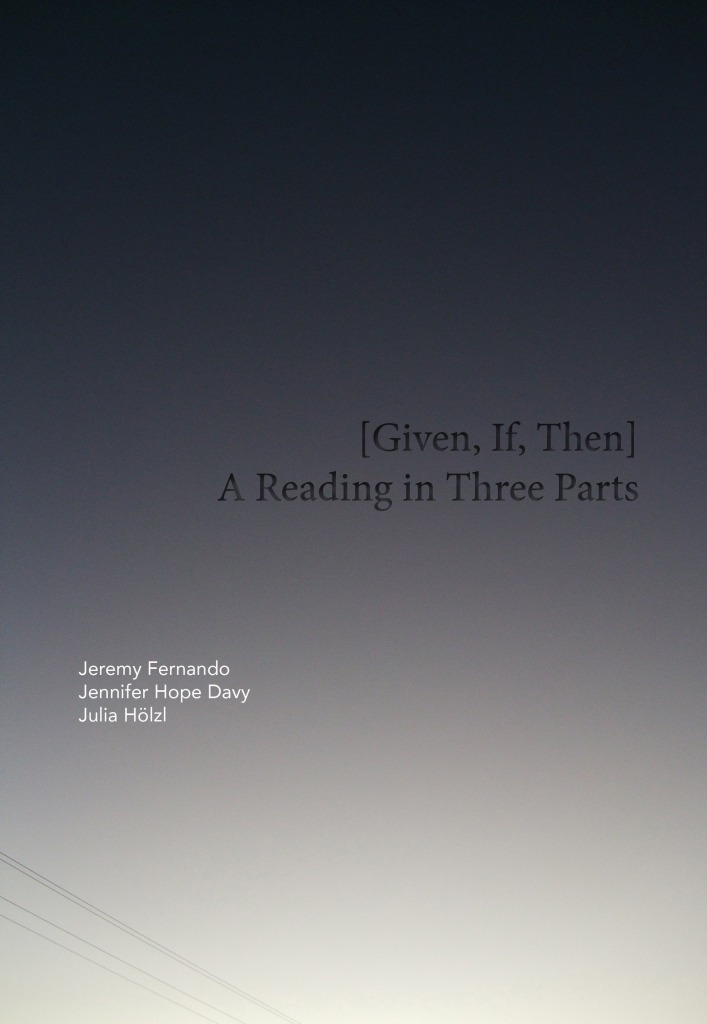 Joyous in the exploration of reading’s impossibilities and the mystery of being exposed, there, before the unknown.

~ Christopher Fynsk, Director of the Centre for Modern Thought, University of Aberdeen and Dean of Media & Communication, European Graduate School

[Given, If, Then] attempts to conceive a possibility of reading, through a set of readings: reading being understood as the relation to an Other that occurs prior to any semantic or formal identification, and, therefore, prior to any attempt at assimilating, or appropriating, what is being read to the one who reads. As such, it is an encounter with an indeterminable Other, an Other who is other than other — an unconditional relation, and thus a relation to no fixed object of relation.

The first reading by Jeremy Fernando, “Blind Reading,” unfolds through an attempt to speak of reading as an event. Untheorisable in itself, it is a positing of reading as reading, through reading, where texts are read as a test site for reading itself. As such, it is a meditation on the finitude and exteriority in literature, philosophy, and knowledge; where blindness is both the condition and limit of reading itself. Folded into, or in between, this (re)reading are a selection of photographs from Jennifer Hope Davy’s image archive. They are on the one hand simply a selection of ‘impartial pictures’ taken, and on the other hand that which allow for something singular and, therefore, always other to dis/appear — crossing that borderless realm between ‘some’ and ‘some-thing.’ Eventually, there is a writing on images on writings by Julia Hölzl. A responding to the impossible response, a re-iteration, a re-reading of what could not have been written, a re-writing of what could not have been read; these poems, if one were to name them such, name them as such, answer (to) the impossibility of answering: answer to no call.

Jennifer Hope Davy is an artist and writer whose work moves between the poetic and the parodic, largely operating in the form of a gesture, an act or a proposition. She was born and raised primarily in Jersey (New Jersey). She has studied, worked and wandered in various countries across the globe and is now currently in situ. Davy received her Fine Arts degree from the San Francisco Art Institute, her Masters in Art History and Criticism from the University of Texas San Antonio and completed her PhD at the European Graduate School (EGS), where she is currently a post-doctoral fellow, focusing on contemporary art as an apparatus of mobility within aporetic junctures. Forthcoming books include Staging Aporetic Potential and Pedestrian Stories. In addition to art and writing, Davy has functioned as a critic, curator, editor, producer, and professor of art and media studies.

Jeremy Fernando is the Jean Baudrillard Fellow at the European Graduate School, where he is also a Reader in Contemporary Literature & Thought. He works at the intersections of literature, philosophy, and the media; and has written eight books — including Reading Blindly, and Writing Death. His work has also been featured in magazines and journals such as Berfrois, CTheory, TimeOut, and Vice, amongst others. Exploring other media has led him to film, music, and art; and his work has been exhibited in Seoul, Vienna, Hong Kong, and Singapore. He is the general editor of both Delere Press and the thematic magazine One Imperative, and a Fellow of Tembusu College at the National University of Singapore.

Julia Hölzl is the Maurice Blanchot Fellow at the European Graduate School, where she also received her PhD. Currently completing a second doctorate at the Centre for Modern Thought at Aberdeen University, her present research focuses on the notion of finitude in Blanchot and Heidegger. Julia has studied and taught a variety of disciplines in the humanities and social sciences in Austria, Germany, Spain, Switzerland, the United Kingdom, and Thailand, where she has been a Visiting Professor at the Institute of International Studies at Ramkhamhaeng University (Bangkok) since 2009. Book publications include Transience: A poiesis, of dis/appearance (Atropos Press, 2010).