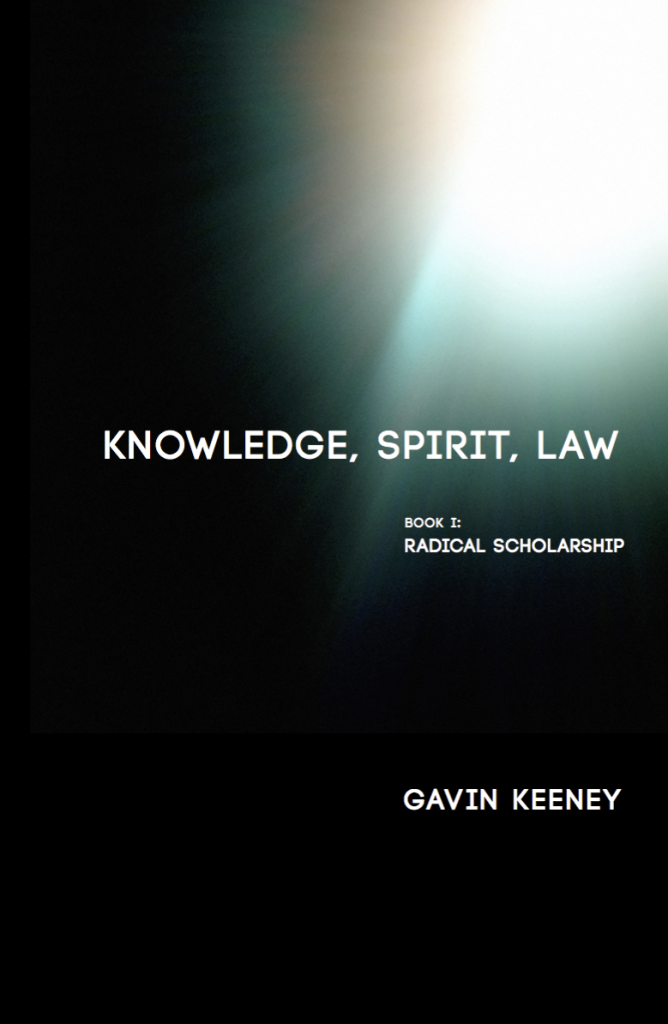 Knowledge, Spirit, Law is a de facto phenomenology of scholarship in the age of neoliberal capitalism. The eleven essays (plus Appendices) in Book 1: Radical Scholarship cover topics and circle themes related to the problems and crises specific to neoliberal academia, while proposing creative paths around the various obstructions. The obstructions include metrics-obsessed academia, circular and incestuous peer review, digitalization of research as stalking horse for text- and data-mining, and violation by global corporate fiat of Intellectual Property and the Moral Rights of Authors. These issues, while addressed obliquely in the main text, definitively inform the various proscriptive aspects of the essays and, via the Introduction and Appendices, underscore the necessity of developing new-old means to no obvious end in the production of knowledge — that is to say, a return to forms of non-instrumentalized intellectual inquiry. To be developed in two concurrent volumes, Knowledge, Spirit, Law will serve as a “moving and/or shifting anthology” of new forms of expression in humanistic studies. See also Book 2: The Anti-Capitalist Sublime.

THE CENTER FOR TRANSFORMATIVE MEDIA, Parsons The New School for Design, is a transdisciplinary media research initiative bridging design and the social sciences, and dedicated to the exploration of the transformative potential of emerging technologies upon the foundational practices of everyday life across a range of settings.

Gavin Keeney is an editor, writer, and critic. His most recent books include Dossier Chris Marker: The Suffering Image (2012) and Not-I/Thou: The Other Subject of Art and Architecture (2014), both produced as part of PhD studies conducted in Australia and Europe from 2011 to 2014. He is the Creative Director of Agence ‘X’, an editorial and artists’ and architects’ re-representation bureau founded in New York, New York, in October 2007.