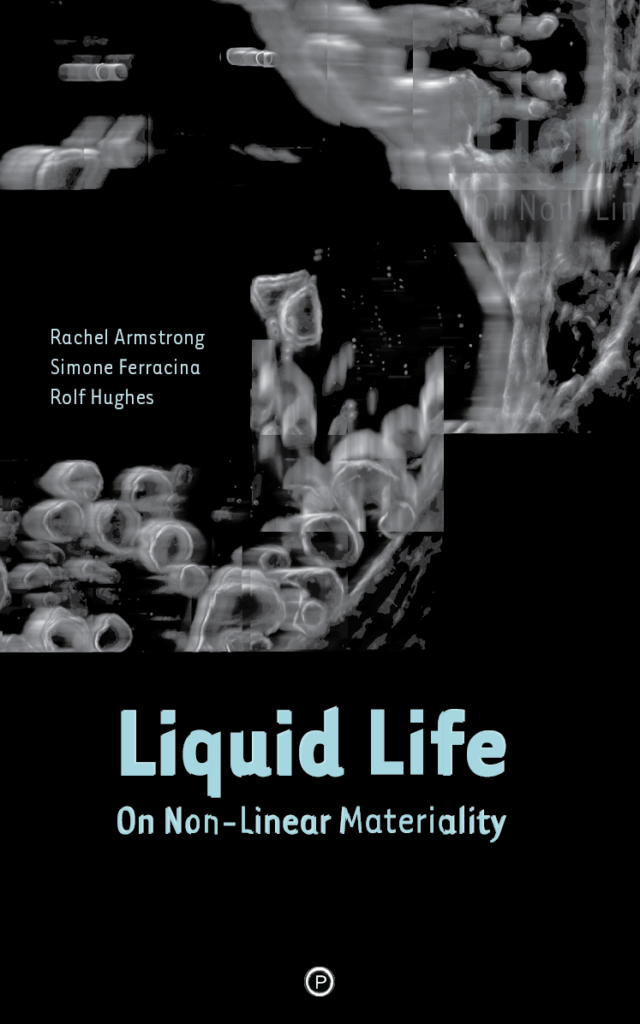 If we lived in a liquid world, the concept of a “machine” would make no sense. Liquid life is metaphor and apparatus that discusses the consequences of thinking, working, and living through liquids. It is an irreducible, paradoxical, parallel, planetary-scale material condition, unevenly distributed spatially, but temporally continuous. It is what remains when logical explanations can no longer account for the experiences that we recognize as part of “being alive.”

Liquid Life references a third-millennial understanding of matter that seeks to restore the agency of the liquid soul for an ecological era, which has been banished by reductionist, “brute” materialist discourses and mechanical models of life. Offering an alternative worldview of the living realm through a “new materialist” and “liquid” study of matter, Armstrong conjures forth examples of creatures that do not obey mechanistic concepts like predictability, efficiency, and rationality. With the advent of molecular science, an increasingly persuasive ontology of liquid technologies can be identified. Through the lens of lifelike dynamic droplets, the agency for these systems exists at the interfaces between different fields of matter/energy that respond to highly local effects, with no need for a central organizing system.

Liquid Life seeks an alternative partnership between humanity and the natural world. It provokes a re-invention of the languages of the living realm to open up alternative spaces for exploration, including contributor Rolf Hughes’ “angelology” of language, which explores the transformative invocations of prose poetry, and Simone Ferracina’s graphical notations that help shape our concepts of metabolism, upcycling, and designing with fluids. A conceptual and practical toolset for thinking and designing, liquid life reunites us with the irreducible “soul substance” of living things, which will neither be simply “solved,” nor go away.

Rachel Armstrong (EAG founder) is Professor of Experimental Architecture at Newcastle University, as well as a Rising Waters II Fellow for the Robert Rauschenberg Foundation (April-May 2016), a TWOTY futurist (2015), Fellow of the British Interplanetary Society, and Senior TED Fellow (2010). Rachel is also coordinator of the Living Architecture project, an EU-funded project that establishes the principles for our buildings to share some of the properties of living things (e.g., metabolism), operating at the intersection of architecture, building construction, bio-energy and synthetic biology. She is also the author of Vibrant Architecture: Matter as CoDesigner of Living Structures (De Gruyter, 2015), Star Ark: A Living, Self-Sustaining Spaceship (Springer, 2017), and Soft Living Architecture: An Alternative View of Bio-informed Design Practice (Bloomsbury, 2018).

Simone Ferracina (EAG researcher) leads the design of Living Architecture. Simone is the founder and editor of the online journal Organs Everywhere (Œ), and the Director of the Œ Case Files imprint in collaboration with punctum books — a platform for experimental practices that fundamentally question architecture’s boundaries, technologies, methods, and evaluation systems. He is also a PhD candidate in Philosophy, Art and Critical Thought at the European Graduate School (EGS) in Saas-Fee, Switzerland, where his research aims to theorize radical modes of co-authorship and the reactivation of wastes through design, beyond current up-cycling paradigms.

Rolf Hughes (artistic research director for EAG) works between writing and performance to develop new transdisciplinary practices. With a PhD in Creative and Critical Writing from the University of East Anglia (UK), he has published extensively on artistic, design-led, and practice-based research, as well as plays, prose poems, and fiction. Rolf was previously Head of Research and Professor of Artistic Research at Stockholm University of the Arts, and has been twice elected Vice President of the international Society for Artistic Research.

One thought on “Liquid Life: On Non-Linear Materiality”