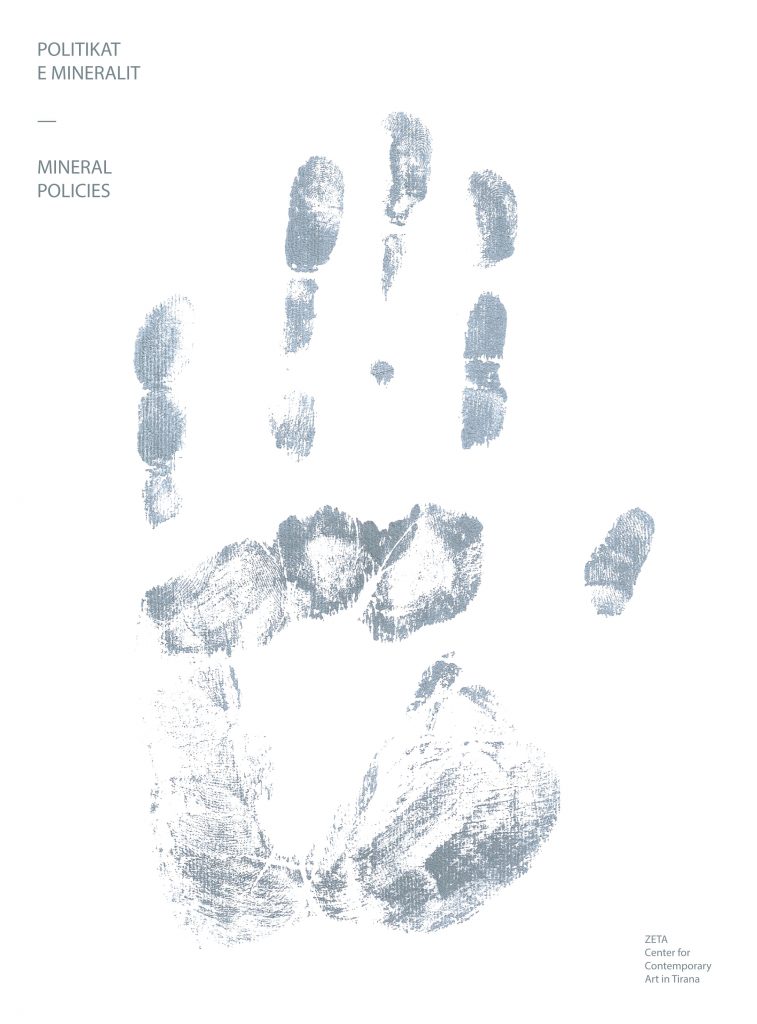 Mineral Policies provides a record of an art residency organized by the ZETA Center for Contemporary Art in the mining region of Bulqiza in northeastern Albania, where four artists and activists from Albania, Blerta Hoçia, Diana Malaj, Pleurad Xhafa, and Ergin Zaloshnja, created a collective body of works in close proximity with the local miners, while still maintaining their own discrete spheres of action. This residency was followed by a public exhibition, Each Strike Leads to the Next, featuring video works produced during the residency as well as a series of objects, curated by Vincent W.J. van Gerven Oei, director of the Department of Eagles in Tirana.

This book includes documentation of the residency and the exhibition, as well as the record of a public discussion between curator van Gerven Oei, former Minister of Finance Arben Malaj, mining engineer Genc Myftiu, and mining worker Bardhul Alla, moderated by cultural journalist Elsa Demo. The book also includes a conservation between cultural theorist Jonida Gashi and van Gerven Oei with the artists.

Mineral Policies documents an important attempt of present-day Albanian artists to reflect on and align themselves with workers and labor activities within a political climate in which neoliberal extractivism and mafia-controlled local and national government have seriously compromised modes of solidarity and survival.

ZETA Center for Contemporary Art is a non-profit exhibition space founded in 2007 by Valentina Koça in Tirana, Albania. Ever since, ZETA has significantly contributed to the vitality and dynamics of the contemporary art scene in Albania, functioning as an autonomous cultural venue for multidisciplinary approaches to visual arts (including painting, sculpture, photography, video, installation, sound, and performance), primarily through a series of exhibition projects at both local and international levels. ZETA also hosts educational and artist-in-residence programs, workshops, and discursive events (such as public lectures, curatorial and artist presentations, conferences and public debates) that reflect on the pressing socio-cultural issues of our times in relation to the visual arts, most notably in the context of the western Balkans and Albania in particular. While acting as a nexus of collaborative practices between artists and curators, critics, researchers and other art professionals, ZETA has developed long-term partnerships with local, regional, and international institutions, such as T.I.C.A – Tirana Institute of Contemporary Art and Residency Unlimited, New York. Through YVAA, The Young Visual Artists Awards Network, ZETA has served as a co-organizer – and, since 2018, the main organizer – of the ARDHJE Award for Contemporary Visual Artists from Albania up to 35 years of age.