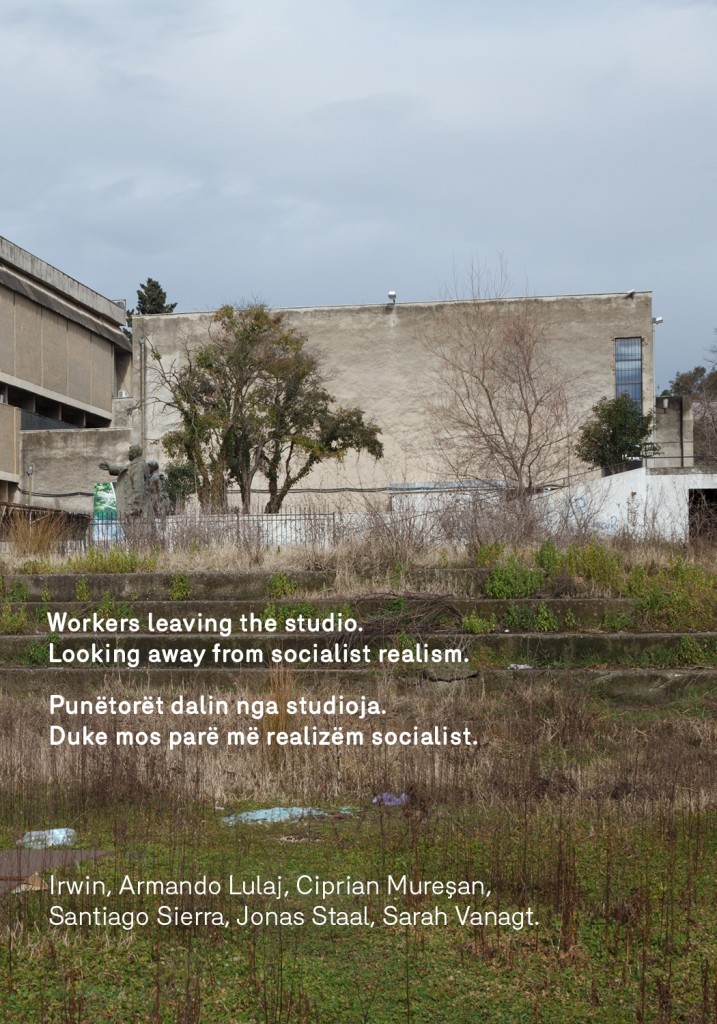 Workers Leaving the Studio. Looking Away from Socialist Realism. catalogs the exhibition “Workers leaving the studio. Looking away from socialist realism.,” curated by Mihnea Mircan in the National Gallery of Arts in Tirana, Albania in 2015. According to Mircan, “The […] exhibition reflects on another projection machine, whose history and consequences, unlike cinema, are circumscribed by national boundaries, specific histories, and ideological configurations. The regime of production and representation of socialist realism radicalizes the violence that the creation of a new image does to its subject: it intensifies the fraught relation between refashioned representation and that which is represented. Its insistence on a particular, projective notion of reality is commensurate with the coercion of daily — cultural, social, emotional — life into a grid whose perspective lines and vanishing points carry heavy ideological charges. It enforces what it represents onto that which it represents, so that representation would replace reality.”

Apart from a full documentation of the exhibition by photographer Marco Mazzi, the catalogue also features theoretical and art-historical contributions, both in English and in Albanian, on socialist realist art as developed in Albania under the communist regime, as well as texts highlighting contemporary attempts to display political realities through progressive artistic practices. Artists include: Santiago Sierra, Jonas Staal, Ciprian Mureşan, Irwin, Sarah Vanagt, and Armando Lulaj, with scholarly contributions by —

Vincent W.J. van Gerven Oei studied composition, linguistics, conceptual art, and philosophy in the Netherlands, USA, and Switzerland. He studies under Christopher Fynsk at the Centre for Modern Thought at the University of Aberdeen and is Visiting Fellow at Tembusu College, National University of Singapore. The monograph Five Legal Interventions and the three-volume monumental survey Lapidari (punctum books, forthcoming) are currently in preparation. He has translated the work of Jean Daive, Alessandro De Francesco, Hervé Guibert, Dick Raaijmakers, Avital Ronell, and Nachoem Wijnberg, among others, and his writings have appeared in journals such as continent., Frakcija, nY, Parmentier, postmedieval, and Theory & Event. Van Gerven Oei is director of the Department of Eagles foundation in Tirana and runs multilingual publishing house Uitgeverij. He is also one of the founding editors of the journal Dotawo: A Journal of Nubian Studies. Van Gerven Oei lives and works in Tirana, Albania.