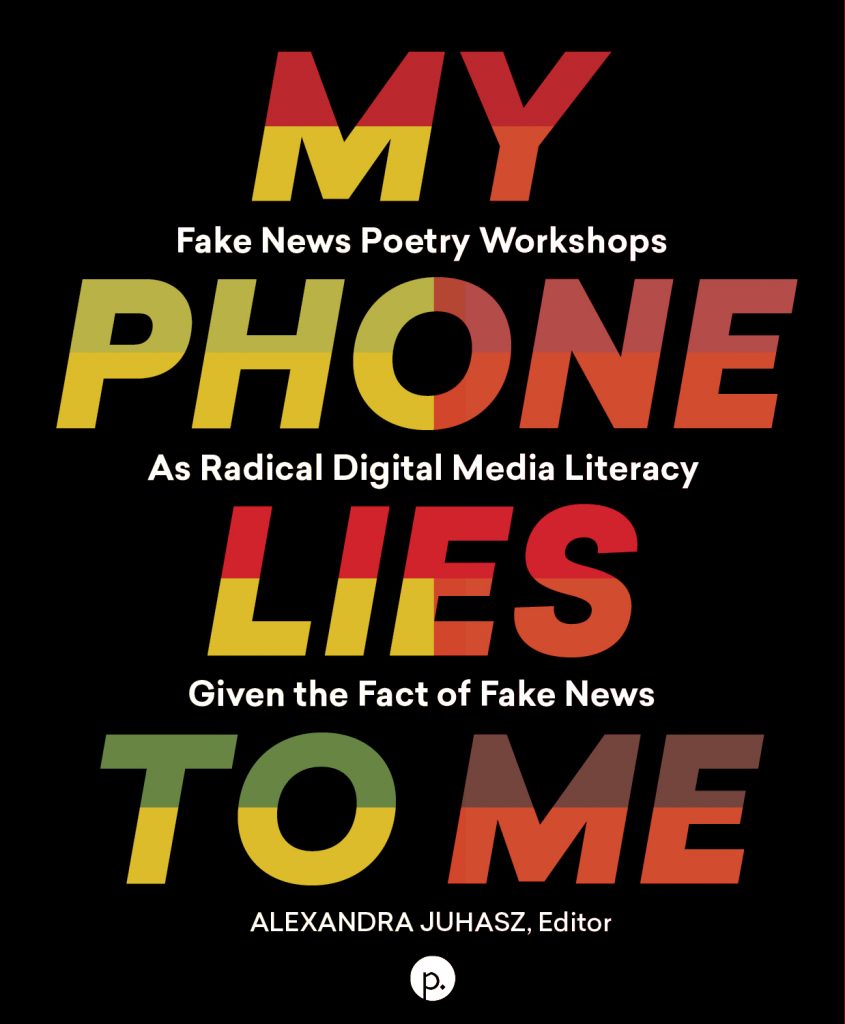 This book of poems about fake news written by diverse project participants is foremost an invitation and invocation for you to participate, with others, in an experiment in knowing and working differently with the internet: Fake News Poetry Workshops. Between 2018 and 2020, Alexandra Juhasz participated in more than twenty workshops around the world. These continue. Each differs in form and structure, but participants are always asked to attend to research, their own knowledge about the internet and social media, and what they can learn from their workshop and previous ones.

My Phone Lies to Me shares poems created during those sessions. As moving, eloquent, and useful as they may be—and you are invited you to indulge in and learn from them—enjoying and learning from the poems is only a small part of this book’s point. Four short essays (two by Juhasz, with a forword and afterword by critical internet scholars Tara McPherson and Margaret Rhee, respectively) introduce and situate the project’s processes of radical digital media. You can learn what Fake News Poetry Workshops make, do, and believe in, as well as how to collaborate with others to create your own.

Fake News Poetry Workshops are one way to counter dominant and dominating internet modes and values, to fight the corrupt ways of being and knowing that use digital media to create, fuel, and weaponize fake news. The project verifies good news in the face of fake news: we can gather together in our many local places and use analog structures (about digital things and ways) to generate, hold, and share “art answers to fake questions.”

Alexandra Juhasz is a Distinguished Professor of Film at Brooklyn College, CUNY. She makes and studies committed media practices that contribute to political change and individual and community growth. She is the author/editor of scholarly books on AIDS including AIDS TV (Duke University Press, 1995) and We Are Having This Conversation Now: The Times of AIDS Cultural Production (with Ted Kerr, Duke University Press, 2022); fake (and real) documentaries (The Blackwell Companion to Contemporary Documentary, with Alisa Lebow, 2015) and Really Fake (with Nishant Shah and Ganaele Langlois, Minnesota University Press, 2021); YouTube (Learning from YouTube, MIT Press, 2013); and black lesbian filmmaking (with Yvonne Welbon, Sisters in the Life: 25 Years of African-American Lesbian Filmmaking, Duke University Press, 2018). She is the producer of educational videotapes on feminist issues from AIDS to teen pregnancy as well as the feature fake documentaries The Watermelon Woman (Cheryl Dunye, 1996) and The Owls (Dunye, 2010). She writes about her cultural and political commitments in scholarly and more public platforms including Hyperallergic, BOMB, MS, X-tra, and Lamda Literary Review.