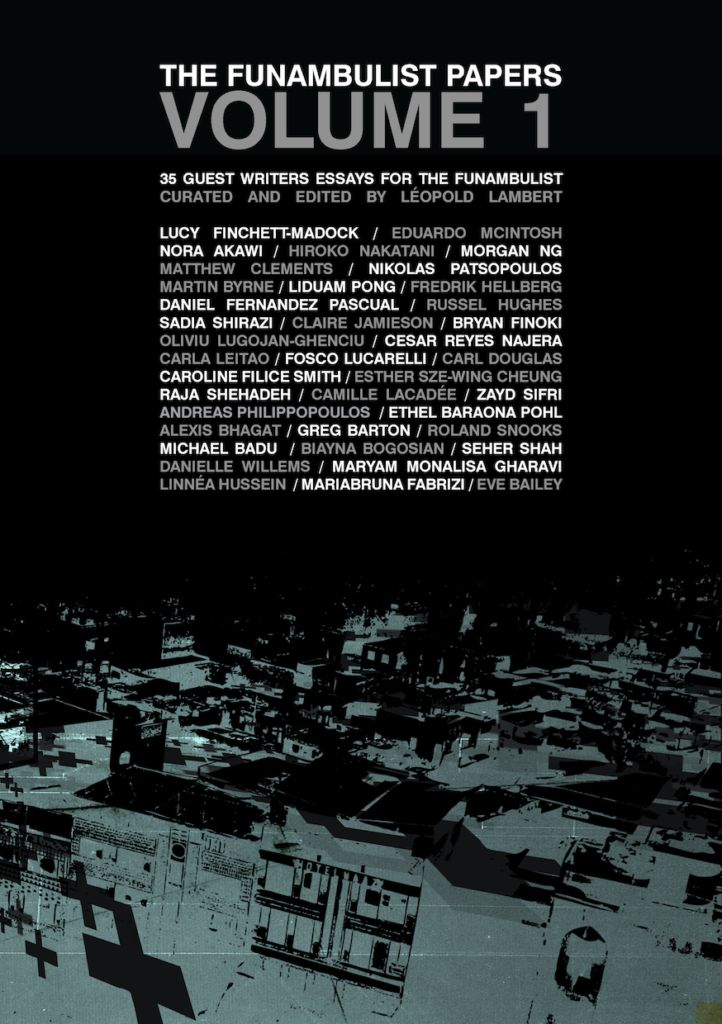 This book is a collection of thirty-five texts from the first series of guest writers’ essays, written specifically for The Funambulist weblog from June 2011 to November 2012. The idea of complementing Lambert’s own texts on his blog with those written by others originated from the idea that having friends communicate with each other about their work could help develop mutual interests and provide a platform to address an audience. Thirty-nine authors of twenty-three nationalities were given the opportunity to write essays about a part of their work that might fit with the blog’s editorial line. Overall, two ‘families’ of texts emerged, collected in two distinct parts in this volume.

The first part, The Power of the Line, explores the legal, geographical and historical politics of various places of the world. The second part, Architectural Narratives, approaches architecture in a mix of things that were once called philosophy, literature and art. This dichotomy represents the blog’s editorial line and can be reconciled by the obsession of approaching architecture without care for the limits of a given discipline. This method, rather than adopting the contemporary architect’s syndrome that consists in talking about everything but being an expert in nothing, attempts to consider architecture as something embedded within (geo)political, cultural, social, historical, biological, and dromological mechanisms that widely exceed what is traditionally understood as the limits of its expertise.

POST-POLITICAL ATTITUDES ON IMMIGRATION,
UTOPIAS AND THE SPACE BETWEEN US
Ethel Baraona Pohl & Cesar Reyes

THE MOSQUE: RELIGION, POLITICS AND
ARCHITECTURE IN THE 21ST CENTURY
Michael Badu

MY DEAR FRANCIS . . . WHAT KIND OF PHOENIX
WILL ARISE FROM THESE ASHES?
Nikolas Patsopoulos

A VISIT TO THE OLD CITY OF HEBRON
Raja Shehadeh

OFF THE GRID LEFT OUT AND OVER
Carl Douglas

THE GROUNDBRAKING CLARITY OF
RYAN AND TREVOR OAKES
Eve Bailey

WOULD HAVE BEEN . . . AN INVENTORY
Camille Lacadée

The Funambulist Papers is published as part of the Documents Initiative imprint of the Center for Transformative Media, Parsons The New School for Design, a transdisciplinary media research initiative bridging design and the social sciences, and dedicated to the exploration of the transformative potential of emerging technologies upon the foundational practices of everyday life across a range of settings.

3 thoughts on “The Funambulist Papers, Volume 1”