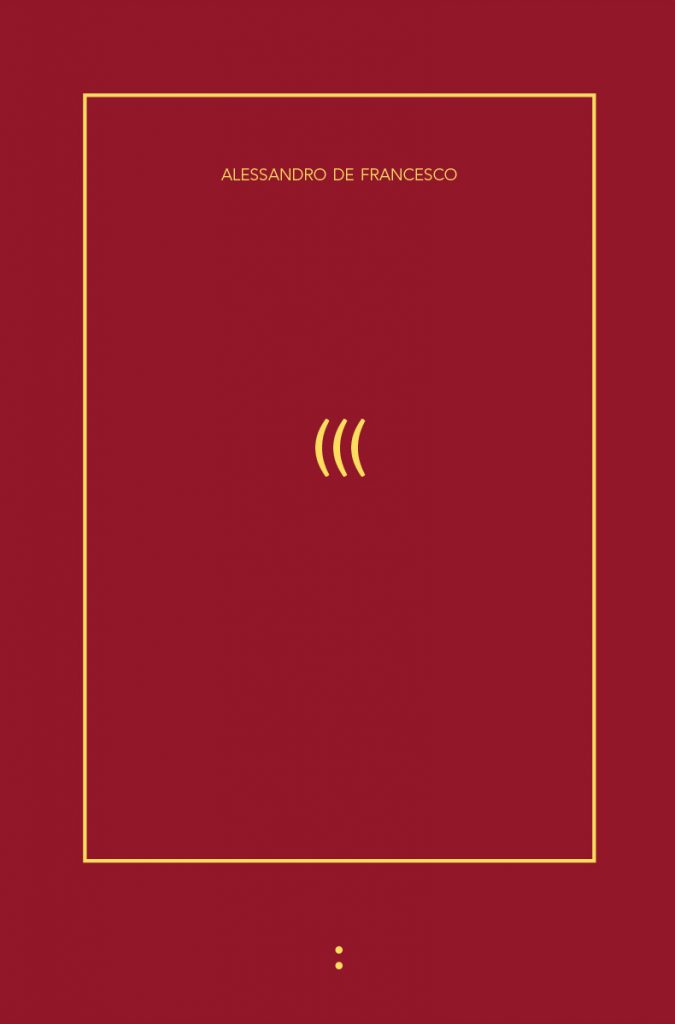 ((( is conceived of not only as a poetry collection and an artist book, but also as a series of actions, a sculpture, an installation, a living object, and a verbal ecosystem. The poetic voyage of (((, recounted in a concrete yet mysterious, abstract yet bodily language, is proposed here in a trilingual English–Italian–French edition. In the spirit of Uitgeverij’s editorial approach, this will allow readers from different parts of the world to discover in their own ways how ((( explores some of the author’s recurring themes through highly innovative poetic and narrative processes: the effects of war on children; technology and surveillance systems; immaterial and unknown phenomena; human emotions and non-human manifestations of nature via undefined objects and bodies, animals, and cosmological landscapes.

The three parentheses of the title hint at multiple layers that are opened and never closed: ((( seeks to push language out of its verbal and human boundaries, towards unobservable territories. The genre of this book, although stemming from poetry in the sense of Dichtung, that is, concentration of meaning in highly dense verbal structures, is eminently queer, as it escapes identities and definitions. Through its multidimensional, intense, and surprising writing architecture, ((( explores new conceptual and emotional possibilities in the 21st century, confirming poetry and post-genre writing as powerful forms of inquiry in the contemporary era.

Alessandro De Francesco is a poet, artist, and essayist. He held faculty positions at the École Normale Supérieure and the European Graduate School, among others, and currently teaches poetry and fine arts studio practice at the Bern University of the Arts, the Basel Academy of Art & Design, La Cambre School of Visual Arts in Brussels, and the School for Graphic Research, also in Brussels. In 2013 he obtained his PhD in literary theory from the Sorbonne University in Paris. His work has been presented in multiple international contexts, among which the Kelly Writers’ House at the University of Pennsylvania, Brown University’s Literary Arts Series, the Centre Georges Pompidou, the Kunsthalle Basel, the Strasbourg Museum of Modern and Contemporary Art, the Louis Vuitton Foundation, the Casa delle Letterature in Rome, the BeHave program in Luxembourg, and the Biennale Gherdeina in Italy. Among his books: Remote Vision: Poetry 1999–2015 (punctum books, 2016); Continuum: Writings on Poetry as Artistic Practice (Uitgeverij, 2015); Augmented Writing (La Camera Verde, 2013); Redéfinition (MIX, 2010). Further information on www.alessandrodefrancesco.net.