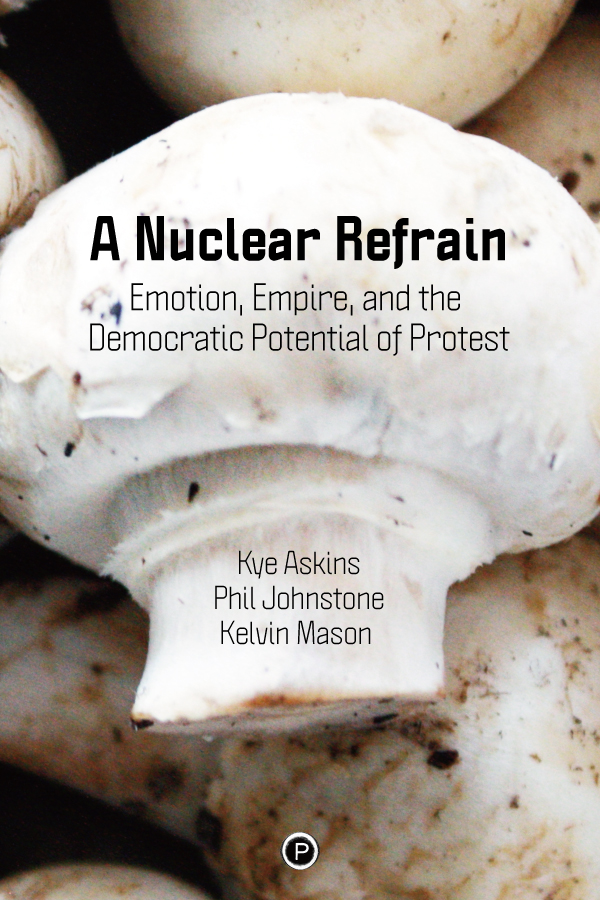 A Nuclear Refrain is a spatial fiction, and miniature chapbook (measuring 4 X 6 inches), that critiques the policy of nuclear deterrence, the concept of Mutually Assured Destruction, and the UK’s decision to replace its Vanguard submarines, the so-called Trident replacement. We challenge that decision via extending our geographical imaginations into the past, present, and future. Noting the more usual economic, moral, and strategic objections to Trident and its replacement, A Nuclear Refrain considers the issues from less familiar perspectives, vis-a-vis the emotional and embodied, empire and the establishment, and democratic potentialities.

Set against the authors’ ongoing participation in extensive public protests against the UK’s decision to replace Trident in 2016, A Nuclear Refrain disrupts familiar academic and policy forms of writing. It is “an uncomfortable hybrid between academia and fiction,” intent on discomfiting the reader to spur the radical reimagining of a world profoundly shaped by the threat of nuclear weapons. Inspired by author and social critic Charles Dickens, this book draws on the form of A Christmas Carol. Transported by “ghosts” of the nuclear past, present and future, a pro-Trident British policy maker, the Right Honourable Roger C. Bezeeneos, has his perceptions sorely challenged. But will Roger allow his feelings to influence his decision-making? Will he recognize the yearning for an empire lost that mobilizes the British establishment? And will he admit the suppression of political participation that a commitment to nuclear deterrence determines? It’s your call, Roger.

Kye Askins is a human geographer – and human – who does research on issues of identity, citizenship, emotions, and everyday geographies of resistance. She works especially with asylum seekers, refugees and more settled residents in the UK around building connections, re-envisioning "integration," and enabling capacities for emancipatory change. Her most recent research explores how mundane geographies dis/enable "meaningful" encounters between long-term residents and newcomers to inner city areas. Her approach is actively engaged research that, in theory and in practice, challenges dominant discourses and structures of exclusion, and emphasizes participants as co-producers of knowledge. More broadly, Kye’s research and teaching is embedded in struggles for environmental and social justice; her work on nuclear disarmament ties into this wider understanding of geography as a way to not only "know" the world, but through which to re-make it in more sustainable, liveable, and equitable ways.

Phil Johnstone is a Research Fellow currently working at the University of Sussex in Brighton. Following an Undergraduate degree in Geography and an MSc in Environmental Governance, both at the University of Manchester, Johnstone completed his PhD in Human Geography from the University of Exeter. He has researched and written about a variety of issues related to Science and Technology policy and Political Geography, including civil-military nuclear interdependencies, energy policy more broadly, the role of the state in sustainability transitions, the phasing out of socio-technical trajectories, Scottish independence, English Devolution, and the Geographies of Tolerance. He also has a long-standing interest in the cultural and political significance of nuclear weapons, particularly the relationship between the UK’s "nuclear deterrent" and understandings of British national identity.

Kelvin Mason is a writer, para-academic, and activist. His research focuses on social movements, ethics, and future imaginaries. His research contributions in human geography include developing a notion of landscape justice with respect to wind farm development, proposing a radical activist imperative for environmental citizenship, and constructively critiquing the spacerelational constraint of localism as an ethic in the Transition Town movement. Regarding developments in participatory action research, Mason believes that engaging with poststructuralist critique and an ethics of care can contribute to the theoretical rigor and relational practice of the methodology. He has published previous work on nuclear weapons, Trident replacement, and academic activism. In their collaborative ventures, Kye Askins and Kelvin Mason have pushed the boundaries of expected and accepted forms of writing. Of a chapter they contributed to a volume on radical pedagogy, the editor wrote that is was "a game changer in terms of how we approach geographical enquiry […] being explicitly transgressive in the way they have written up their scholarship.”

One thought on “A Nuclear Refrain: Emotion, Empire, and the Democratic Potential of Protest”