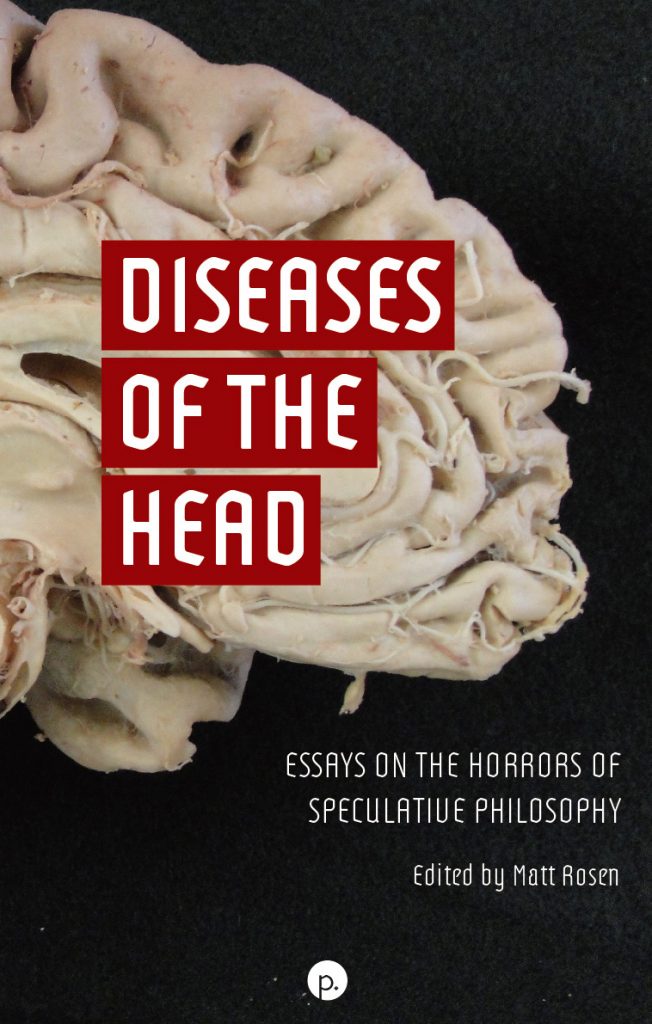 Diseases of the Head is an anthology of essays from contemporary philosophers, artists, and writers working at the crossroads of speculative philosophy and speculative horror. At once a compendium of multivocal endeavors, a breviary of supposedly illicit ponderings, and a travelogue of philosophical exploration, this collection centers itself on the place at which philosophy and horror meet. Employing rigorous analysis, incisive experimentation, and novel invention, this anthology asks about the use that speculation can make of horror and horror of speculation, about whether philosophy is fictional or fiction philosophical, and about the relationship between horror, the exigencies of our world and time, and the future developments that may await us in philosophy itself. From philosophers working on horrific themes, to horror writers influenced by heresies in the wake of post-Kantianism, to artists engaged in projects that address monstrosity and alienation, Diseases of the Head aims at nothing less than a speculative coup d’état.

Refusing both total negation and absolute affirmation, refusing to deny everything or account for everything, refusing the posture of critique and the posture of all-encompassing unification, this collection of essays aims at exposition and construction, analysis and creation – it desires to fight for some thing, but not everything, and not nothing. And it desires, most of all, to speak from the position of its own insufficiency, its own partiality, its own under-determinacy, which is always indicative of the practice of thinking, of speculation. Considering themes of anonymity, otherness and alterity, the gothic, extinction and the world without us, the end times, the apocalypse, the ancient and the world before us, and the uncanny or unheimlich, among other motifs, this anthology seeks to articulate the cutting edge which can be found at the intersection of speculative philosophy and speculative horror.

Matt Rosen / Introduction: On Diseases of the Head

Matt Rosen / “Those Who Are Not Counted: For a Theory of Generic Affliction”

Hamad Al-Rayes / “Sublime Horror in the Tales of E.T.A. Hoffmann”

John Cunningham / “Reproducing It: Speculative Horror and the Limits of the Inhuman”

Julia Hölzl / “Horror vacui (“That nothing is what there is”)”

Matt Rosen is a philosopher. He is the author of numerous books and pamphlets, including Speculative Annihilationism (Zero Books, 2019) and the forthcoming treatise Angst and Abnegation. His theoretical writings have also appeared in journals and anthologies. His work centers on radical ethics and alterity, and his interests range across a variety of areas, including moral philosophy, metaphysics, literature, mysticism, psychoanalysis, theology, politics, and aesthetics.

2 thoughts on “Diseases of the Head: Essays on the Horrors of Speculative Philosophy”