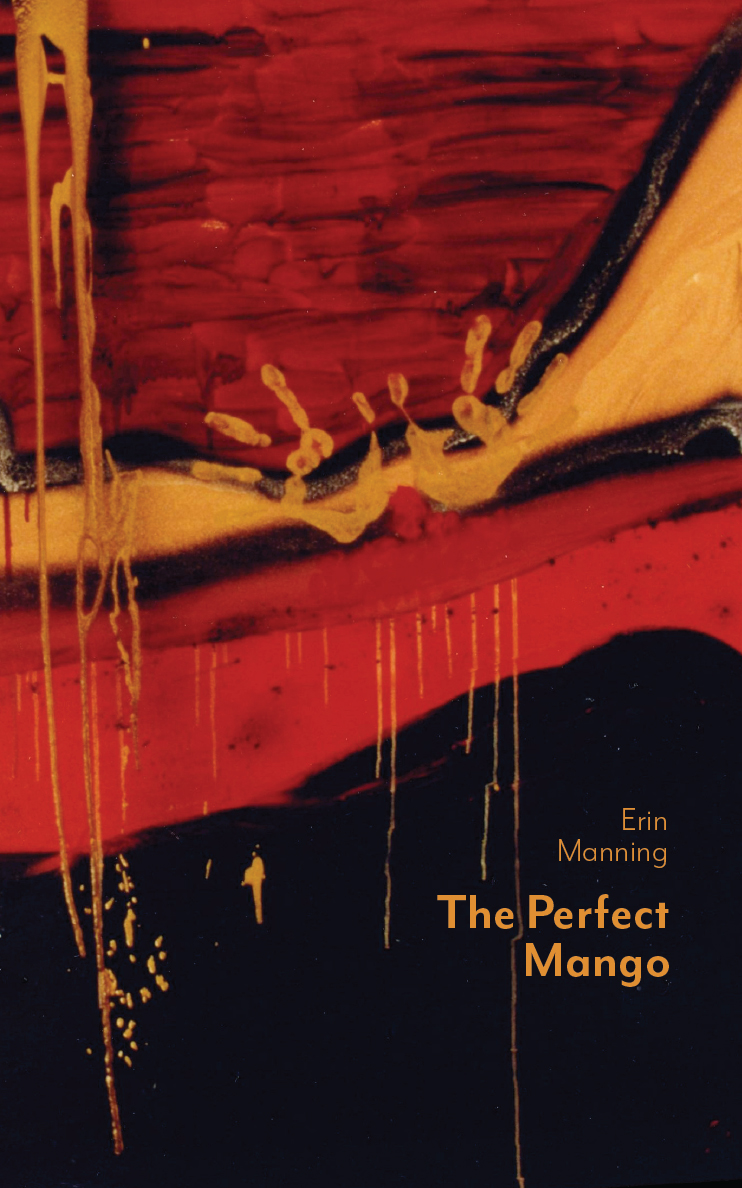 “How to confront victimization, while refusing the role of the victim? How, after trauma and abuse, can one regain a sense of life’s possibilities and plunge headlong into their pursuit, without defensively hardening the boundaries of the self? Without immunizing it against the outside, knowing that it is in the great outside of the world’s roil and commotion that potential radically resides – tooth-to-jowl with continued danger? How to grapple with the horrors of the past, without paradoxically binding oneself to them in a Sisyphian attempt to exorcize them through feats of memory and analysis (terminable or interminable)? How, not to own the past, but repossess the future of that past? In The Perfect Mango, Erin Manning charts a path of resistance, resilience, and journeying toward health that is starkly different from the currently dominant identity-based strategies. She writes survival, in what can best be described as a fabulatory autobiography that is rooted in real events but opens them up to each other, and out to a different future. The path is signposted with a motto, implicit here, subsequently expressed in the title of one of her works of philosophy: always more than one. If this is me … what else? If this is life … once more!”

“From the wisdom of the preface that speaks in the voice of experience across the decades, addressing the reader regarding the voice of innocence that long ago did the writing, to the last word of the fierce bildungsroman in inchoate syntax that proceeds at the speed of thought, this book refuses to retreat from itself. An episodic structure, distilled from nineteen consecutive days of writing – part journal and part performance on the page – tempers its kaleidoscopic trauma narration in insightful valences of pressure and release. It converses with Nietzsche’s Zarathustra as periodic guide, its complexity and compassion immense, an early exemplar of this powerful thinker’s gift: writing upwelling from philosophy. The Perfect Mango transports us across grief and suffering with consummate authority and grace. It is an uncompromising pursuit, a sensorial seeking that feels and falls over truths, turning pain into a lens and a light that brings us face to face with the unknown.”

“Intensely intimate, painfully arresting, Manning’s early memoir offers us breathless witness to vulnerability. Care, abuse, fear, ecstasis are exposed in pages riven with bodily strength and surrender. The seeds of Manning’s philosophical fascination with movement and moment, with touch and color, percolate in this love story. Using a generic ‘you’ to address lovers, mothers and singular others, she unravels a fabric of multiplicity that leaves the reader gasping/grasping for handrails. A book of now that was then…and then…”

Sexual abuse and abuse of all kinds breaks the body. It cleaves experience into a before and after. In my case, though, time was much more crooked. What is an experience that takes you with it? How to speak of acts that multiply, of ways of living that seem to call them forth? How to speak of a life poised for the unraveling?

The Perfect Mango is a book about the body, about learning to see it as an entity that has no end, something that is never permanently marked by the violence of history, that can swim into a new skin. The sexual trauma that haunts this book is being painted and purged across its pages, and the young woman who refuses to remain caught in the capture of trauma is also learning to feed herself, to become a body-being that will endure in new forms and through new forms of mutual making. I know this girl, for she is many. I love this girl, as I love us all—we misfits whose hurt provokes us to live through other styles and modes of becoming-together.

In 1994, at the age of twenty-five, when the “terrible brokenness that comes with sexual assault” was folded deep within her body and thoughts of suicide were always close by, Erin Manning wrote The Perfect Mango at an almost feverish pitch: nineteen chapters in nineteen days, a sort of self-rescue operation, where writing became a form of making (and feeling) life otherwise. Throughout those nineteen days, and although not able to fully articulate it to herself at the time, Manning wrote her way into a “composition that asks how else life might be lived.” And in the rhythms of that composition, which was also a living, Manning was, and is, able to refuse the category and norm and stillness of “victim” (while still understanding the inheritances of violence) in order to follow instead the more-than-I as well as the joy of the “more-than of experience in the making.”

Twenty-five years later, Manning allows these earlier writings to find their way back into the world, which is also a way of giving “voice to those moments of messy survival” while also asking us, who share in (and help to bear) those moments as readers, to consider “other ways of listening to the urgency that is living.” To (re)publish the book now is to give it a place in the world in a way that honors its force as something that is always beyond anyone’s claim to it, even Manning’s. In this sense, The Perfect Mango invites us, with Manning, to be in excess of ourselves, and also to consider, in Manning’s words, “how to create conditions for living beyond humanism’s fierce belief that we, the privileged, the neurotypicals, the as-yet-unscathed, the able-bodied, hold the key to all perspectives in the theatre of living.” Ultimately, The Perfect Mango and Manning’s reflections on its composition ask us to consider living “in the fierce celebration of a world invented by those modes of life which tear at the colonial, white, neurotypical fabric of life as we know it.”

Erin Manning is a professor in the Faculty of Fine Arts at Concordia University (Montreal, Canada). She is also the founder of SenseLab, a laboratory that explores the intersections between art practice and philosophy through the matrix of the sensing body in movement. Current art projects are focused around the concept of minor gestures in relation to colour and movement. Art exhibitions include the Sydney and Moscow Biennales, Glasshouse (New York), Vancouver Art Museum, McCord Museum (Montreal) and House of World Cultures (Berlin) and Galateca Gallery (Bucarest). Publications include For a Pragmatics of the Useless (Duke, forthcoming), The Minor Gesture (Duke, 2016), Always More Than One: Individuation’s Dance (Duke, 2013), Relationscapes: Movement, Art, Philosophy (MIT, 2009) and, with Brian Massumi, Thought in the Act: Passages in the Ecology of Experience (Minnesota, 2014).