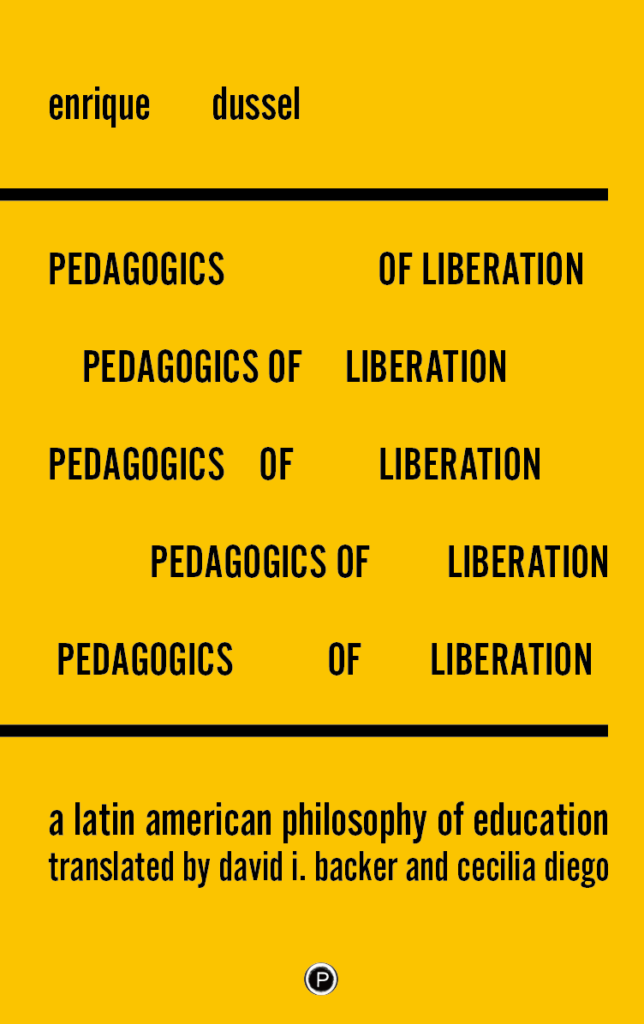 Enrique Dussel is considered one of the founding philosophers of liberation in the Latin American tradition, an influential arm of what is now called decoloniality. While he is astoundingly prolific, relatively few of his works can be found in English translation — and none of these focus specifically on education. Founding members of the Latin American Philosophy of Education Society David I. Backer and Cecilia Diego bring to us Dussel’s The Pedagogics of Liberation: A Latin American Philosophy of Education, the first English translation of Dussel’s thinking on education, and also the first translation of any part of his landmark multi-volume work Towards an Ethics of Latin American Liberation.

Drawing heavily from the ethics of Levinas, Dussel examines the dominating and liberating features of intimate, concrete, and observable interactions between different kinds of people who might sit down and have face-to-face encounters, specifically where there may be an inequality of knowledge and a responsibility to guide, teach, learn, care, or study: teacher–student, politician–citizen, doctor–patient, philosopher–nonphilosopher, and so on. Those occupying the superior position of these face-to-face encounters (teachers, politicians, doctors, philosophers) have a clear choice for Dussel when it comes to their pedagogics. They are either open to hearing the voice of the Other, disrupting their sense of what is and should be by a newness beyond what they know; or, following the dominant pedagogics, they can try to communicate and instruct their sense of what is and should be (which Dussel, in a Latin American context, associates with dominant cultures) to the (supposed) tabula rasas in their charge. Dussel calls that sense of what is and should be “lo Mismo.” [The French in Levinas is “le Même,” and Backer and Diego have translated Dussel’s “lo Mismo” as “the Same.”]

This groundbreaking translation makes possible a face-to-face encounter between an Anglo Philosophy of Education and Latin American Pedagogics. “Pedagogics” should be considered as a type of philosophical inquiry alongside ethics, economics, and politics. Dussel’s pedagogics is a decolonizing pedagogics, one rooted in the philosophy of liberation he has spent his epic career articulating. With an Introduction by renowned philosopher Linda Martín Alcoff, this book adds an essential voice to our conversations about teaching, learning, and studying, as well as critical theory in general.

One thought on “Pedagogics of Liberation: A Latin American Philosophy of Education”